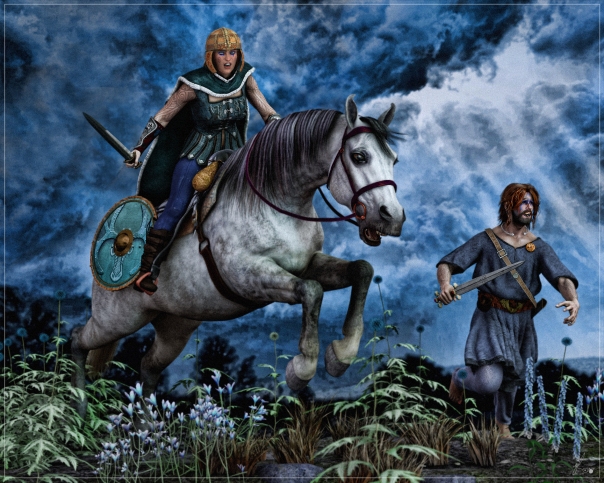 Two Orlanthi thunder rebels in the rain-blessed hills of Sartar.

Near final draft of a  rather ambitious art project (by my standards) using DAZ Studio and Photoshop. Well worth clicking for the large scale image!

Comments and suggestions most welcome, as this is still evolving.

The Ambush: A Tribute 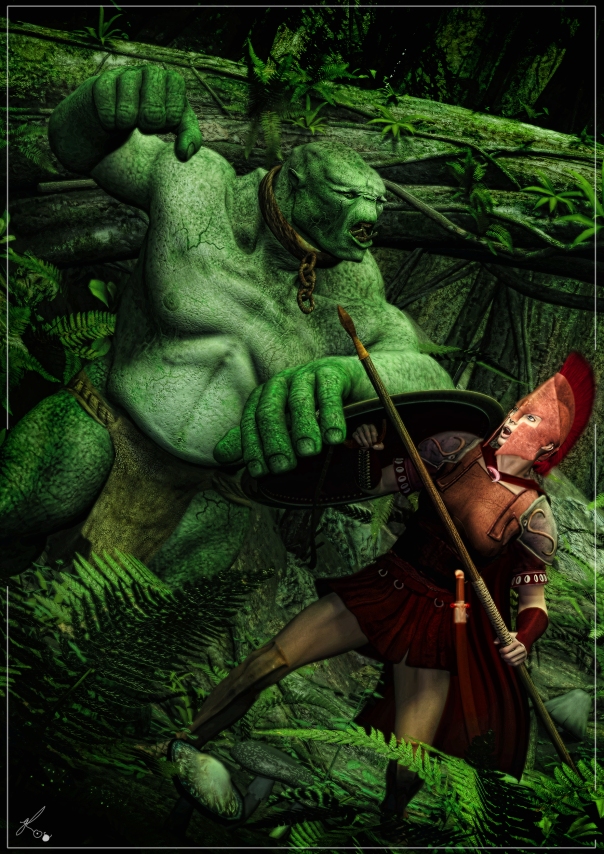 The final version, with added detailing and more functional armour.

North of the Cholanti the hills rise wild, and ancient forests stand inviolate in isolation; nest and shelter to brutal powers older than time.

The Uz call it Dagori Inkarth. It is a deadly land, beyond understanding, filled with secret trails known only to the Wind and the unseeing eye of Darkness. Darkspore and whipvine fester there, no tula stone claims boundary with the wilderness, no herd or crop contends against the tyranny of branch and rock and water. Shadows fester that are servant to neither sun nor chaos moon, and the air itself whispers chill and turgid, battered by the unceasing torrent of the Sky Vent.

The Lady walks there, and the Old Bear, that one, but of the human tribe only the odaylans dare its sunless weald, and they seldom, in solitary secrecy and fear.

Braggi flat refused to lead the Lunars north, even after threats against his kin. He had earned his honour name in that shadow-haunted wild, and mead and poets’ praise in plenty, but even he refused to walk there after the season of harvest and falling leaf.

The Lunars, wrapped in silver and false confidence, headed north without a guide. A mere file, some twenty spears, and only six on horseback.  Four weeks they said, to journey to the lake beneath Skyfall and to return. Four weeks.

Three seasons on, and neither word nor tale. Like so many before them, they have been swallowed by the wild.

And white-faced, Braggi returns from the Ring. By flickering flame, soft-spoke and fearful, he whispers that we must go and find them.

‘The Ambush’ depicts a Lunar hoplite ambushed by a troll in the wilds north of the Cholanti River. It is offered in part as a tribute to the work of  Luise Perrin, who gave us a certain classic book cover, and to a splendid cover yet to come. And yes, the Lunar is left handed.

By coincidence, as I was writing this post, a friend returned my original print copy of Cults of Prax, now home after many a year. Ah, RQ2, Greg, Steve, Luise, Lisa, Ray… salut!

Helden: A novella of the Hero Wars

The order comes: gash flesh, gore shield, make iron ring. Glut the wolves and birds of prey with fat and flesh of foe.

I am pleased to note that Helden is again available for download in PDF format. As the clans of Sartar and the Far Place rise in rebellion, a life-sick Humakti and his Vingan companion journey to a hill of swords, where the fate of the Kingdom depends on a desperate and ill-matched few.

Helden is a tale of death and laughter from the Hero Wars. 79 pages. Grab it now.

Warriors went to Whitewall. Here we stood together, the last moot of the free. Here, with ruse and ritual and quest most desperate, defying the world’s wyrd, we held an Empire at bay for two long years.

Here we forged a tribe called Hurricane, birthed by a blue arrow, led by a high king’s courage, strengthened by a star queen’s wisdom, borne upon a desperate storm, forged by feat and fire and the bitter blade-clash of battle.

Here our eyes were opened. Here we forged a new vision, a new allegiance, a new way of living and dying.

I am pleased to announce that ‘Ruin’ is once more available for download here at Myth-O-Logic. ‘Ruin’ describes the journey of two Orlanthi exiles – a skald named Braggi and a vingan called Cradledaughter – to the ruined city of WhiteWall. Written and illustrated by John Hughes,  ‘Ruin’ was first published in Ye Booke of Tentacles VI.

To Walk in Far Places

To Walk in Far Places. A preliminary sketch of an Ernaldan peace weaver. DAZ Studio and Photoshop.