Tribes of the Far Place 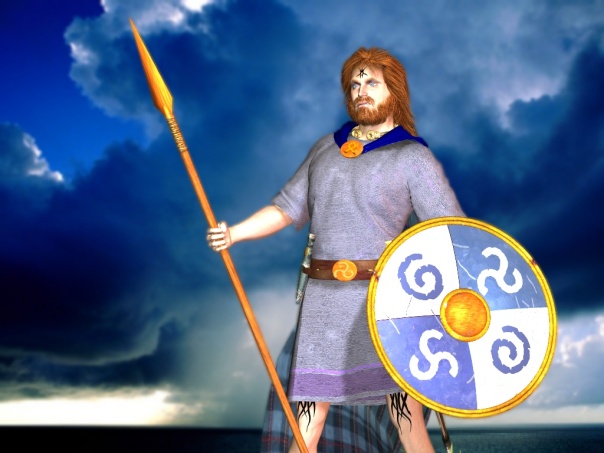 This article was first published in Questlines.

The tribes of Far Point are tough and single-minded. Far Walkers and former Tarsh Exiles, they have regularly faced Tarshite and Lunar armies, Sartarite raiders, Chaos out of Ginijji (Snakepipe Hollow), Uz from Dagori Inkarth and Tusk Riders from the Stinking Forest. More recently, political and religious intrigues centring on the rivalry between worshippers of the Orlanthi sun god Elmal and the Solar Yelmalio have also claimed many lives.

Geographically, the Far Place can be divide into two distinct zones. The Sharl Plains centring around Alda Chur are densely populated and well cultivated, with rich volcanic soils and a relatively mild (though moist) climate. The tribes that dwell upon the Plain and among the gentle hills of the south and east (the Vantaros, Princeros and Dinacoli) are predominately Yelmalian farmers, and are prosperous and secure. They employ a three field system for their crops, and make extensive use of the plough and metal farming implements. Most farms are small, run by a single extended family or bloodline. The steads themselves are elaborate and well constructed, typically comprising several wings with separate byrnes. Crops of barley, oats and rye predominate, supported by the herding of maned cattle and fat tail (milking) sheep. A proportion of most crops are sold at market, and so the use of metal coinage is common.

Enriched by trade contact with Tarsh and the Lunar Empire, Alda Chur has grown from a Youfish ruin to become a sophisticated outpost of Empire, a powerful trading city, a centre of Solar learning and ritual, and host to the Lunar Quartermaster General’s southern supply base.

The uplands of the north and west provide rough shelter to scattered clans of a different ilk. The wilderness tribes (the Tovtaros, Tres, Amad and Bachad) still retain a significant number of Orlanthi worshippers. Roads are virtually non-existent, and there are very few towns or even villages (Ironspike, Alone, Fort Engoli). Defended communal steads housing several bloodlines are the norm. The steads themselves are for the most part simple, with a single spacious lodge being divided into human habitation and cattle byrnes. Agriculture is less important than cattle herding; and hunting, fishing and trapping are all becoming more important over time. Slash and burn farming methods predominate, and agricultural tools are simple, sometimes being constructed of stone, wood or antler. Transhumance is important, with the stead populations spreading out during the warmer seasons into hunting camps or upland grazing areas. The wilderness steads are almost entirely self-sufficient, and so apart from the annual cattle markets there is little commercial trade or use of minted coinage. Instead, elaborate systems of gifting and cattle-loans form the backbone of both inter-stead social networks and the wilderness economy.

The upland marshes and forests (‘the gors and the gallt’) have never been tamed, and the elements of wind and water reign supreme. The magic geography of Skyfall Lake and the proximity of powerful Uz kingdoms in Dagori Inkarth make the uplands colder and wetter than they otherwise would be. Some mythologies claim that the element of fire is eternally weak here: certainly most would agree that the uplands are both physically and spiritually soggy.

Most of Far Point is over 800 metres above sea level. Many hills rise over 1,500 metres, and the highest peaks top 3,000 metres. (The tree-line is approximately 1200 metres). In the south, Kero Fin rises to touch the Sky Dome, while Sky River Titan provides the north with majesty of a different kind.

The Far Place was once a thriving heartland of the Empire of the Wyrms Friends, but like Sartar and Tarsh was depopulated of humans during the Dragonkill War. The Elmali hero Taros the Ridgeleaper and his children led the Far Walkers – disparate groups of landless rebels, opportunists, wyrd seekers, outlaws and religious minorities – into the Far Place wilderness in 1357, led by a star javelin and a righteous wind. They came from Bilini, Saird and Aggar, and sought new lands and the freedom of the storm. Yet even as they cut their first steads and cleared the ruins of Alda Chur, kinstrife, rivalry and feuding had forged bonds of hatred and violence between them. It would ever be their legacy.

Before 1495 the Far Point Region was a part of the Kingdom of Tarsh, which was then independent of (and often hostile to) the Lunar Empire to the north. At that time the nascent tribes of the region included the Vantaros, Princeros, Tovtaros, Amad, and Bachad tribes. Both the Vantaros and Tovtaros tribes already had large groups of Yelmalio and Elmal worshippers amongst them – and consequently some infighting due to the activities of northern missionaries of the Bright Sun.

In 1490 a daughter of the Red Emperor, Hon-eel the Artess, came to the kingdom of Tarsh in peace. She proved her links to the Earth worshippers (devotees of the Earth Shaker temple) in the area by surviving their secret high holy day ceremony, and bringing with her the secret of a new crop called maize. Soon afterwards King Pymjeesab, the King of Tarsh, decided to marry Hon-eel.

In 1496 the Far Point declared itself independent of the Kingdom of Tarsh after the marriage of the Lunar Hon-Eel the Artess and King Pymjeesab ended in the king’s mysterious disappearance and her pregnancy. The exact date was when the king’s shade was seen to cross the river Styx into the land of the dead by a holy priestess of the Shaker Goddess. A Regent of Far Point was chosen from the Vantaros tribe by a vote of all the tribes. Alliances were made with other Tarsh patriots in Wintertop and Bagnot to throw the Lunars out and choose a non-Lunar king. However, all attempts at expelling the invaders failed, and for the next fifty years the patriots were hard pressed to hold on to their own lands.

In 1545 the region declared its loyalty to the leader of the Wintertop Tarsh Exiles, Palashee Longaxe, who had thrown out the Lunar Kings, and had been declared king by the Priestesses of the Shaker Goddess. (Also at this time the ruler of Far Point began to style himself as Prince of the Far Place.) Palashee forced the Lunar Tarsh King Philogos to flee from Tarsh and ruled in his place from 1538 to 1555.

Palashee’s reign was a great one. However, the Lunars returned by treachery and killed Palashee (though not before their king was crippled by Palashee’s Longaxe). After Palashee’s death, the Far Point once again declared its independence from the returned Lunar kings. Also about this time, the Vantaros tribe converted to Yelmalio after a brief civil war.

In 1583, after the disastrous Battle of Grizzly Peak and the siege of Alda Chur, the Sartar King Terasarin’s son, Sarotar, married the Princess of the Far Point and brought the tribes of the Alda-Churi into the Kingdom of Sartar.

In 1602, Lunar armies invaded both Sartar and Far Point. The North was decimated by years of murder and bloody fighting. Though they controlled the towns and stockades, the Lunar hold on the wilderness steads was always tenuous. When nearly 3,000 Lunar infantry were trapped and killed in the wilderness at Ghost Gors (1607), the invaders abandoned military force as their prime strategy of assimilation.

Four years after the Lunar conquest of the Far Point, many Orlanthi priests and godi began to agitate against the Lunar occupiers, advocating their violent expulsion. There were already many established Lunar and Tarshite families in the tribes of the region (from earlier links to Tarsh) and there arose many lawsuits and feuds which disrupted the whole of the north for five years. In 1611 many tribal moots broke up into civil disorder, torn apart by the rival antagonists. Orlanthi leaders declared the Righteous Wind.

Some now claim that this bloody kinstrife was deliberately provoked by Lunar agitators. Certainly the Vantaros prince Harvar Ironfist was well placed to take advantage of the situation, using the confusion and bloodshed as an excuse to seize total power. With Lunar backing, he declared himself Duke of the Alda-Churi and Lord Protector of the Light, taking the holy city of Alda Chur by fire and sword. The main Orlanthi opposition was destroyed when Harvar’s forces, led by wind-walking Gagarthi housecarls, took them by surprise and treachery at Gamla’s Leap. Most of the Alda-Churi tribes then purged their ranks of the most vocal and powerful Orlanthi and Elmali worshippers. Survivors sought exile in neighbouring Prax and Sartar, with many taking refuge in the lands of the Torkani.

Though a brilliant general and politician, Ironfist is becoming increasingly conservative in his Solar ways. He aspires to both the cult of Yelm and the title ‘Prince of the Far Place’. As his obsession grows, he has alienated both Lunar authorities and many of his more pragmatic Solar supporters. Many feel that the light is fading: the death of many of Ironfist’s closest kin during a recent fertility festival is seen as a powerful omen. Some of his enemies believe that he secretly aspires to the role of Lokamayadon, and that he is the power behind the mysterious and deadly cult of the Bigger Wind. So the shadows gather.

The dominant tribe of the Alda Chur Confederation is the Vantaros, which has grown rich and prosperous with the coming of the Empire. The tribe, whose territory includes the city of Alda Chur, is solidly pro-Lunar, with a core of traditional (and conservative) Yelmalio sun worshippers.

The Vantaros’ traditional allies are the Yelmalio-dominated Princeros tribe. They too have benefited greatly from the coming of the Lunars. The tribe is almost exclusively agricultural, and has a more pragmatic approach to matters of religion.

The wilderness Tovtaros tribe is split asunder by the agony of kinstrife. Though the tribe is now predominantly Yelmalian, a number of wilderness clans remain loyal to traditional Orlanthi ways, despite being greatly depleted in both strength and numbers since the unsuccessful Righteous Wind Revolt of 1611. The tribal king, Conla Brightshield, is moving against the remaining Orlanthi clans one at a time.

Other tribes of the Confederation are the enslaved Bachad and Amad, and the recently formed Tres, all based around Alone. Like the Tovtaros, they are traditional Orlanthi, and have suffered greatly because of it. However, many individual steads remain relatively safe in their isolation, and openly worship the Wind Lord and his kin.

The traditionally Sartarite Dinacoli tribe joined with Ironfist during Starbrow’s Rebellion in 1613, and has since joined the Alda Chur Confederation. They are Yelmalian worshippers who share many close ties with the Princeros.

The Princeros and Vantaros tribes are still loyal to Ironfist (as are the Dinacoli in political terms) though dissatisfaction is growing. The Tovtaros, Tres, Amad, Bachad and the tiny city of Alone still contain powerful and recalcitrant Orlanthi. The purge following the Righteous Wind ceased in 1613 due to the threat from Starbrow’s Rebellion, and a treaty of peace was made between the tribes. As the years slip by, that peace is becoming increasingly strained.

And the land is afflicted by a hero.

Article by John Hughes, with thanks to Kevin Jacklin and David Hall for use of Home of the Bold background materials.