‘The Finest Music’ is loosely based on an ancient Celtic tale of Finn Mac Cumhaill and the Fianna, and was written in May 1996 for a Gloranthan storytelling contest at Convulsions in Great Britain. The tale was originally published in the Convulsions II Handbook. The stave poem therein is based on the traditional forms of the Kalevala.

‘The Finest Music’ was written to be recited aloud. Because of this, the style is relatively simple, but I’ve used storytelling devices such as ritual openings, repetition, alliteration and strong internal rhyme. It’s a great audience participation piece, and has become one of the favourite pieces in my storytelling repertoire.

The story is also available for download as aPDF document. 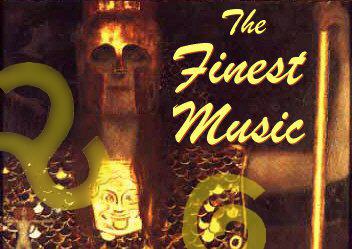 ‘The wind’s strength is that it ever changes.’ This understanding was my initiation gift, my Making Way, given by the powers of the wilderness when they made me a man. It came to me in the uplands, blind and starving in the gors, running and screaming as my animal totem tore me into seven pieces. Then the rain came, friend of all things, the giftbringer. With it the South Wind, and it was that wind that spoke to me.

This is what the South Wind said…

‘The Tribe of the Storm is a warrior tribe. The tribe of the Air is a fighting tribe. Our weapon is the wind, and the strength of the wind is that it ever changes. This is a rune-truth. Listen and understand. The wind is never the same.’

We are gathered together now as single heart and blood.

Let the sweet cedar smoke of the story fire be as air in our lungs.

Let ancestors and flesh gather close and listen to my tale.

It is a gift to be remembered.

My clan is Tresdarnii, my tribe is Tovtaros. Orlanth is the god of my blood and Odayla the Hunter is my guide. I tell you now of a journey midst the gors and the gallt, the forest and the waste of the Far Place.

And this is the way of it. By our feet we went that Sea Season from Lagerwater Stead on the winding trail down to Jaskors Hold. Our destination was the ring fort at Ironspike, in the cattle-rich lowlands. Kierston the Lawspeaker rode with us, and in her train three ponies packed with winter furs and sweet resin gums, Lagerwater’s grudging tribute to Conla the Tovtaros king.

Our journey took us under the ice-blue shadow of Hard Edge, and then across the lightning-seeded ridges of Three Breast Mountain, to be swallowed midst those twisting forests that clothe the escarpment in such deceptive beauty.

We journeyed not the short path, the path of the raider;

Nor the hard path, the path of making;

But the beauty path, the path of the hunter.

I remember it was early Flamaltame, and all the world was new. The awakening passions of the Goddess touched us all, and the gors and the gallt whispered with the promise of new life and power. It was a yellow day and the very air hung heavy like amber.

Yet as I remember, there was little joy in our walking. It was a time of stagnation and anger, of clan against clan and tribe against tribe. It was the time when Harvar Ironfist sat in his high white tower in Alda Chur, and when Conla Brightshield our king moved openly against those loyal to the ways of the Storm. At Lagerwater, the ancient wound of kinstrife had split and festered once again. It was a time of blood and a time of tears:

Blood in the air,

Blood in the eye,

Blood on the burnished blade.

We were all young warriors for the most part, for it was then as it is now: the white hair guards the stead while the dark hair ranges free. And though we were tested all, by the Sword’s Truth I tell you that we were burning and angry and afraid. There had been a weapontake at Lagerwater on the eve of our parting, that the clan might decide how to respond to the treachery of Conla our king. The meeting was a bitter one, with threats and ill-considered oaths uttered over the sacred hearthstone. Father spoke against son, Sun against Wind, Orlanthi against Yelmalian, blood against blood. Even the women had argued against each other. It was the old curse, the curse of the Ridgeleaper. Kinstrife.

Happy indeed is the tribe that has no past.

Was the sword and spear our answer? We were young, we were Orlanthi, it seemed an honourable way. Yet draw a sword against a king and you can throw away the scabbard. Draw a sword against kin and you kill yourself. The Lawspeaker Kierston had counselled restraint. Some had openly called her a traitor to the Storm, a traitor to the clan. The fires of anguish threatened to consume us all.

Stone beneath our feet and stone in our chests.

So we walked that day in uneasy silence. Sunlight flowed golden and slow like honey across our faces, Humakt’s Wind whispered cold at our backs, and the skydome darkened with the promise of storm to come.

There were fingersmore in our party: I walked with my lodge-kin; there was also Kierston the Lawspeaker, the Vingan warrior called Cradledaughter, and Harlii Virginland in her first journey beyond the hunting camps of the Uplands. This was before the time of mourning, before the affliction of the Hero. No skald knew of those women then, the tribes did not yet know their song.

Yet I say to you that the Lawspeaker was deserving of praise-words even then, and so I give you staves that we now all know….

As the Cold Sun in its splendour,

As the LongDark in its chill.

Vision-wise who saw the future;

Far-voiced speaker of the high clans,

Tongue of copper, hand of bronze.

And the Rune upon her forehead,

Speaker’s Rune upon her forehead,

Godi’s mark upon her forehead,

Opening the way of Change!

From a noble stead was nurtured,

From a bloodline true and watchful;

Where the rain whispered its secrets,

Where the gors-bled powers moved.

Iron walker of the two-worlds,

Of the law and of tradition;

On her shoulders marns of kinship,

On her cloak the signs of power;

Which would mark the trails ahead.

And the Rune upon her forehead,

Speaker’s Rune upon her forehead,

Godi’s mark upon her forehead,

Opening the way of Change!

It was Harlii Virginland that led the Lawspeaker’s horse forward along those treacherous and sodden trails. Though no one spoke, Harlii hummed some ancient wordless tune, half to herself, half to the animal spirits and powers that we passed upon the way.

In time we came upon a twisting stand of horned mountain oaks, dark and jutting monstrosities older than Time. The roots of these ancient guardians reach down to the wombplace of the trolls, and their upper boughs press against the skydome itself. Skirting the edges of the grove, we sensed within the inhuman power of the element tribes. Our pack ponies shied, and many of us made warding with our fingers, for in this season the Lady of the Wild can be capricious and cruel. The shadows of the eternal gors pressed close about us.

The Lawspeaker halted then, gazing upwards into the moss-encrusted branches, where an ice wind whispered to the ever-listening leaves. She closed her eyes, raising her arms in an act of supplication to the Old Green Woman and the Son she bore by the Storm.

The rest of us stood silent, unsure of the moment or what it might bode. Kierston sat without movement upon her mount, arms outstretched, as though she too had become an ancient horn-éd tree.

For the Lawspeaker in her boldness had accepted a forest vision from the keepers of the grove.

Slow minutes passed. The cold sunlight drenched us, thick as honey. Shadows made slow circle. A bearded raven somewhere called herald of a death. The wind bit. The trees sighed. The gors waited.

And the Lawspeaker opened her eyes. They carried an inner light that was ancient, numinous, disturbing.

Lowering her arms, Kierston spoke for the first time. Her voice carried a rich cadence of authority, the calm strength of stave magic that only godis know.

“What is it, do you think, that is the finest music in all the world?”

“The greeting song of the Earth Women in Sacred Time”, snapped Cradledaughter, for she was ever-quick with a word or a blade. “The song of joy that greets the sun on his return from hell.”

“A good sound that”, mused Kierston, “and one difficult to better. But I think I know a finer sound.”

“The finest music is the ring of a spear head against a shield”, cried Bhorghil One-Eye, who was fated to win either a hero’s iron or an early grave.

“A good sound that”, agreed the stead-fast one.

“The finest music is the chant of a healer over a wound sore and mortal”, ventured Erissa Long-Arm, who understood the cost of life and of death.

“The Thunder Shout of young men returning victorious from a cattle raid!”, smiled Danwyr Can’t-Be-Moved, who always knew what he wanted.

“The silence that follows a skald’s remaking of the past”, ventured Ardrun the White, who had that gift himself.

“The voice of a warrior who has learned from his mistakes”, snarled Braggi Afraid-Of-The-Dark, who knew the Orlanthi way.

“The whispering of a loved one in the darkness by the hearth”, mused Lanolf Wolf-Born, who felt such things deeply.

“The belling of a stag across the gors”, laughed Harlii Virginland, who walked close with a Goddess we could not yet name.

“The song of the gamlak under the red moon”, said Arson Hunted-By-Bear, for he was never afraid to kiss the trickster.

“The command of a true Queen or King”, spoke Cradledaughter again. “That is sweet music indeed.” And there was an awkward silence for a time.

“They are good sounds all, and indeed sweet music”, said Kierston. “But I am thinking of something sweeter and greater yet.“

“Tell us, sister by marriage-bond. Tell us Lawspeaker. What is the sound of which you speak?”

Our Lawspeaker dismounted then, and made a thank offering to the horned powers of the grove. The rest of us watched in silence, hearing the sounds of the eternal gors, the song and message of the wind.

And so it was we resumed our path of going. From the top of the escarpment we could see distant Ironspike, and Piddledown Stead where Conla Brightshield sat, and a vision of half the world besides.

We journeyed in an easy silence. Sunlight flowed golden and slow like honey across our faces, Humakt’s Wind whispered cold at our backs, the skydome darkened with the promise of storm to come… and an inner wind stirred within our souls.