On The Back of the World-Bird

Huksae or Chigusae is the Crowned-Crane of Being, the World-Bird that carries Ontolos on its back. The wing cycle of her flight determines the Ontolosnan year. Her gigantic wings are visible in the sky for half of the year as a shadowy outline through the cloudy parasol, and their position determines the seasons and cycles of magic. The Ban calendar divides a year (a wing or byon) into six seasons of 29 days, beginning with the first appearance of wings above the haze: HighCome, Wingtouch (heat and high Gi), Downstorm, Restless Sky, Emptiness (cold and low Gi) and Brooding.

The great stories reveal that the World-Bird sometimes raises her head in flight to look down upon the human world with a gigantic eye. Huksae’s identity, purpose and destination is the cause of much speculation. 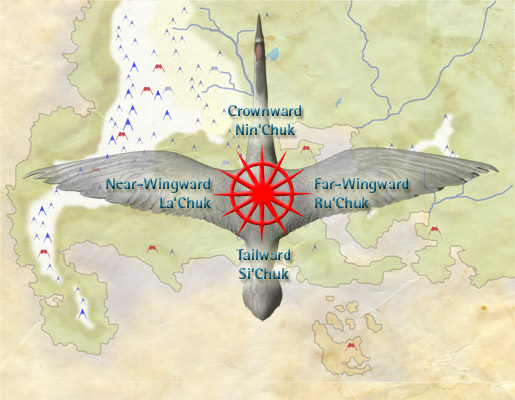 With an unmoving prime sun and gigantic wings visible across the sky for half of each byon, direction-finding in Ontolosna is usually a simple affair. The World-Bird provides a universal frame of reference for those perched upon its back. The prime directions are therefore:

In both the Ban Empire and Perfection of Tlön the left wing appears slightly larger in the sky than the right: hence the ‘near’ and ‘far’ terminologies.

The ‘known world’ is an area approximately the size of the Mediterranean, centred on The Perfection of Tlön. Little is known of other lands, and much of what is known is contradictory. Since Mountain Breaks Storm, even the ancestral Ban Empire has a semi-legendary status to some.

Ontolosnans have no notion of continents, or the true extent of the world. The inhabited world-flow sits atop the World-Bird’s back.

The known world extends approximately 1,000 ka’mu (kilometres) from the crownward to tailward (north to south), and some 1,500 ka’mu from nearwing to farwing, or west to east). Tailward of Tlön lies Bibaram Pada, the Angry Deep, a typhoon-wracked polar ocean given to gigantic tidal surges and frequent tsunamis. Only the Ship Women dare to sail there. Headward lies the endless grasslands of the Kita Kita Kut, the Plain of Ten Thousand Powers, home to nomadic riders and tiny city-states; and the high mountain desert of Nop’Pin, the ‘High Empty’. To nearwing lies the ancestral enemy Empire of the Ban, separated since Mountain Breaks Storm by the unbreachable redoubt of the Shanaranyas. Further to farwing are sparsely-populated, unbroken and unexplored hills, the land of Mon Mon Undok. 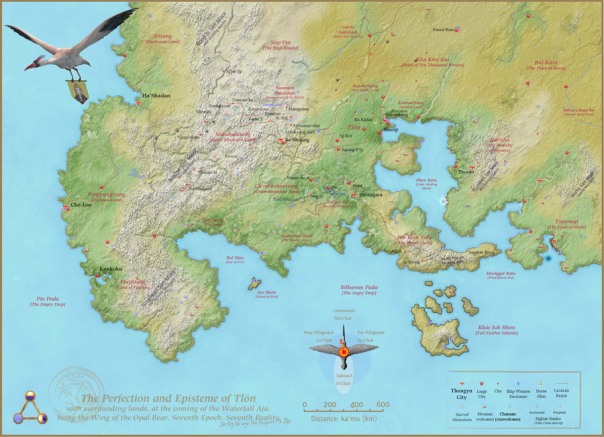 The Bird's Back in the late Seventh Reality

‘To the limits of the eye’

Ontolosna has no discrete horizon. The land rolls on and on before the viewer, to the very base of the great wings (if visible) or until land, cloud and sky dissolve into a hazy, multi-coloured patchwork of colour.
From the vicinity of Tlön, as one looks tailward, the colour is predominantly blue and white. To nearwing, it is mottled greens and blues, interspersed with the brilliant white of the Shanaranyas. Crownward is a dull yellow green. To farwing lies a heavy pastiche of green and black.

The standard unit of distance is the kamu (km) which is approximately one kilometre in length.

In Nunshanttang, the preferred measure is the li. There are two and a half li to the kamu.

Seven kamu constitute a mu or ‘seven’. A ‘seven of sevens’ (mumu) is a colloquial term for ‘a great distance’.