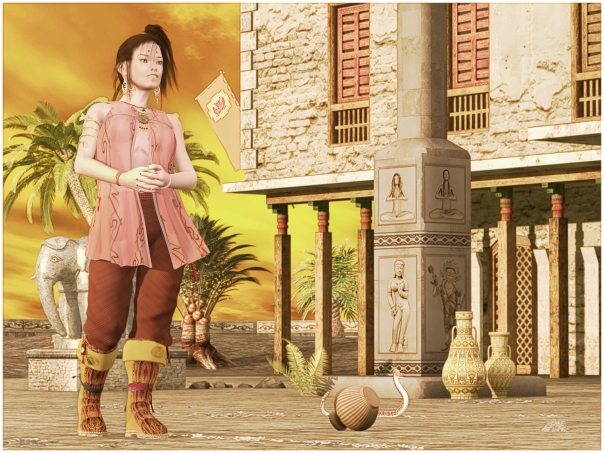 From the “Waterfall” draft …

Chi Lin had green eyes, a fine pair of boots and a weakness for lost causes.

Her boots were what you noticed first.

Her eyes, if you were lucky enough to be close and hold her gaze, were a shimmering cascade of jade and jungle green, flecked with the blue of high mountain lakes and the elephant blue-grey of monsoon clouds. ‘Aji eyes’, her friend Sharak had once described them, ‘eyes of promise’.

Chi Lin had green eyes, a fine pair of boots and a weakness for lost causes.

Chi Lin was a small woman, of mountain blood, perhaps even nomad. She did not know: she had no stories to tell her who she was.

Of short stature, with ruddy skin and unkempt hair,  Chi Lin often felt dowdy when compared with with the Tlonan women of the market. They were lithe and fair boned, their skin oiled to an iridescent blue, their perfumed hair coiled in loving tresses.

Chi Lin’s boots were also green – and blue, and yellow, and red. They were exquisite snow boots from Nunshanttang, crafted in one of the low mountain cities on the Knife Lung Road.

Fashioned from calfskin and canvas and wool, the boots were lavishly decorated with strips of brightly-coloured cloth in all the prime colours of the Mother Sun; a muddied turmoil of silken red and blue and yellow, with tiny though intricate designs picked in silvered snow silk and gold thread. They had sewn-on soles of layered hide turned upward at the toe like the prow of a fishing boat.

The boots were intricate, they beguiled. They were also over-large, clunky, and almost impossible to sprint in.

Chi Lin led a life that involved a lot of sprinting.