← Pan[ic] game background and character drafts
‘A pub most splendid’: The Australia Hotel →

Flappers tapping along on stilt heels: message boys carrying their parcels as blithely as they wear their rakish caps; men of affairs walking by with the sobriety befitting their niche in life; women sauntering idly past….

A primrose path of dalliance, where people loiter by the way to brood over wares which, fascinating as those of an Eastern pettah, beckon from behind shop windows…. The milky sheen of ivory gleaming among the disorder of an art shop, the exquisite example of the dressmaker’s art, lying supinely across a gilded chair, which arouses the worst possible instinct in feminine breasts, the fragrance of massed flowers, the allure of rare books wooing with voiceless magic from behind plate glass—these are some of the temptations lying in wait for the unwary.

Do you want a messenger boy or a racing tip? An exquisite bibelot, jazz garters or a jeweled lipstick case? Discreet companionship or entertainment? An elegant chapeaux perhaps, or a brass nymph, or a new play, or purchase of a book in defiance of the censor’s ban? You should journey to Rowe Street.

Rowe Street is hardly a street at all, but rather a quaint ruelle, a narrow laneway running between Pitt and Castlereagh Streets parallel to Martin Place and proximate to the Hotel Australia. It is a shaded and secluded slice of Bohemia, a world apart, Sydney’s answer to Montmartre.

For fifty years now, Rowe Street has been the centre of Sydney’s bohemian life. Called ‘the most picturesque street in Australia’, its narrow footpaths offer respite from the noise and bustle of the surrounding city. Rowe Street is a place of poets, painters, actors, bohemians and dreamers. It is an arts quarter. It is a ‘gay ghetto’. The precinct’s cosmopolitan speciality shops, garret studios and tea rooms offer a brief respite from urban strife.

Here you will find the Fleet Fliers Messenger Service, and Jim de Lac, an SP bookie who operates from the back room of a barber’s shop. Artist Lionel Lindsay keeps a difficult-to-find garret studio.

In from the crowded, noisy streets,
To this thread of thoroughfares.
You feast on windows, fairie-sweet,
New frocks, old, priceless wares….
An Indian scarf, some priceless jade.
Gifts from the ports of Han:
An English Doulton milk-maid pair
A faded print of Pan!
— Mary Roach.

Intriguing stairways lead upward into mystery: a secret society perhaps, or a theatre group’s rehearsal rooms, or the elegant salon of a male milliner. 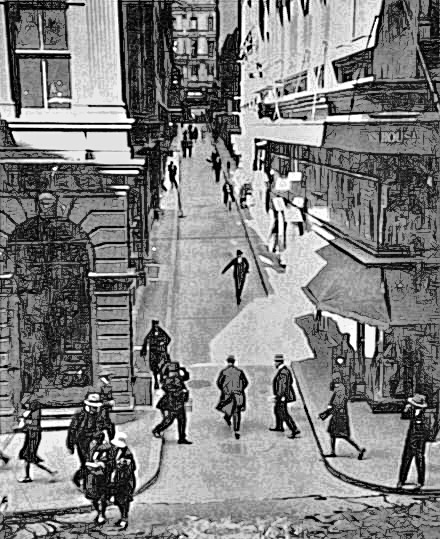 The great Theatre Royal on Castlereagh and Rowe offers diverse entertainments including dramas, comedy, and musical, and ensures a constant presence of actors, musicians, dancers and those who follow them. Rowe Street also houses the tiny Playbox Theatre, a sparkling-new venue for avant-garde plays.

It might seem seems that with a few steps you have left this enchanted quarter to fall back into the noise and rush of the inner city. Behind lie those few moments snatched from mundane reality, which offered moments of temptation and wonder.

Rowe-street lives within itself
In an old tale-laden dream.
— J. K. Phillips.

Posted on October 8, 2019, in Call of Cthulhu, Cthulhu Sydney, Turn of Midnight Waters and tagged Sydney. Bookmark the permalink. Leave a comment.

← Pan[ic] game background and character drafts
‘A pub most splendid’: The Australia Hotel →